Part 7) Packaging and Labelling the Evidence:
Once an item of physical evidence has been removed from the location at which it was found, it must be packaged in such a way that it cannot become contaminated or damaged. It is equally important that the item is unable to escape from its packaging for two reasons. First, to preserve the item from contamination in an unprotected environment. Secondly, to prevent the item contaminating other packaged evidence. For example, imagine the consequences of a suspected drug in the form of a powder escaping from its package. This could end up (and no doubt will end up) on the outside of another package so that when this is handled, that drug becomes transfered to the person who opens the package and then on to other items for examination!

So, the CSI needs to have a wide range of different types of packaging material and know exactly which is best for the items of evidence being collected. Each package must be sealed to prevent anything getting into the package, and anything getting out of it. And each package must be labelled with information that 1) uniquely identifies it,
2) says exactly where it was recovered, 3) says exactly when it was recovered, 4) shows the name and job (e.g., CSI) of the person who recovered it, and 5) provides details of exactly who has handled the item after it has been recovered and packaged. This (5th) part is very important because it gives details of the chain of custody, otherwise called the continuity in the "life" of the item from the moment it was recovered and thereafter. The labels (in the UK) used to record details of the packaged evidence are often called CJA (Criminal Justice Act) labels.

Packaging
Every item of physical evidence recovered at a scene of crime must be packaged individually in a way that prevents the evidence becoming contaminated or damaged. The packaging may have an integral (printed-on) label, or a label will need to be filled in and attached to the packed item. 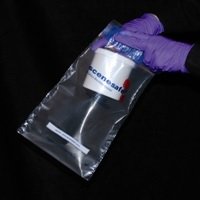 In the UK evidence labels are often called CJA (Criminal Justice Act) labels. These must be fully completed and (if not already printed on the packaging) must be securely attached to the packaging in which the recovered item has been placed and sealed.

Go Back to Part 6

Part 8: AFTER ATTENDING THE CRIME SCENE ....