AFTER CRIME SCENE EXAMINATION
After all physical evidence has been recovered, packaged and labelled, the CID6 crime scene report form has been completed, and all materials have been removed from the scene, it is released back to its original owner. Other police personnel may have further involvement with the complainant or victim, but so far as the CSI is concerned, their involvement at the scene of crime is over. Items of evidence will now brought into the custody of the police for storage, and the CSI will transfer details of their work and their findings on to the police force's computerised systems and be placed in secure file. The work of the CSI for the crime scene they have just examined is now complete, and except for a possible request to attend court to give evidence, the CSI will now be passed another case - by police Force Control - and so for the CSI, the cycle begins again.

For the physical evidence, however, the story is not yet over, because now it has to be passed to others for forensic examination.

THIS IS WHERE THE "INVESTIGATING A CRIME SCENE" STORY ENDS. FROM THIS POINT FORWARDS, WE START TO TAKE A LOOK AT THE FORENSIC EXAMINATION OF THE EVIDENCE.

Taking Steps Towards the Examination of the Physical Evidence
Except for fingerprint and photographic evidence which are examined by specialists in the police force's own scientific support unit, all other items of evidence will be sent to outside agencies / forensic laboratories for examination by forensic scientists. Those items, in their labelled packaging, will be delivered to the Customer Services Desk of the receiving laboratory after which they go in to secure storage for examination at a later time.

The receiving laboratory will also receive documentation about the evidence. In the UK,  the MGFSP  (Submission of Case for Scientific Examination; and Items for Forensic Examination) form is used for submission of evidence to external Forensic Science Provider's laboratories. The first part of the form provides details about the circumstances of the crime, with questions the police want the forensic scientists to answer; the second part provides details (taken from the CJA evidence labels) about the about the items that are being submitted for forensic examination.

PURPOSE of the MGFSP FORM 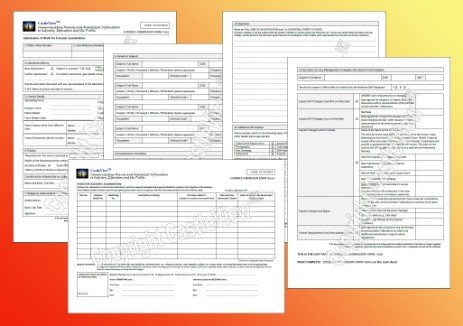 Go Back to Part 7