BEFORE ATTENDING THE SCENE
Before a CSI attends a scene of crime, they need to gather information about the scene they will be attending. This information is provided to them via an "IBIS" log (a computerised Information-Based Intelligence System) and Force Control, the Police Department that received the initial complaint, which will centrally coordinate the actions of the various police personnel called to attend the scene. The CSI will also need to ensure they have everything they physically need such as fingerprint powders, lifting tapes, camera etc., to carry out the examination.

Crime scene examination for volume crime might require just a vist from the CSI, but for major crimes, it can typically involve a wide range of people with different specialities. Depending on the crime, because no one type of professional "knows it all" this could include uniformed police officers, plain clothed detectives (from the CID - Criminal Investigation Department), several CSIs, the crime scene manager, forensic specialists such as biologists, paramedics, fire officers, and the Coroner's Assistant, Police Doctors, and others. The involvement of all of these professionals has to be properly coordinated to ensure that as much evidence as possible is obtained in the investigation of the crime, and the examination of the crime scene. It has to be team work as its very best.

FORCE CONTROL
The Police Force Control Room (also called "Force Control" and the "Police Communications Centre") manages all emergency and non- emergency calls, deploys police resources to a wide range of incidents, and co-ordinates the activities of all those who investigate crime and criminal activity for the force. A large force can expect to receive thousands of calls and manage almost as many incidents each and every day. Much like a spider at the centre of its web, the Force Control Room sits at the heart of every police force (there are currently 43 of them in England, wales, and Northern Ireland) and provides all the core, coordinated functions of Call Handling & Dispatch, the Switchboard, the Public Service Desk, the Crime Bureau, and the Police National Compter (PNC) Bureau. 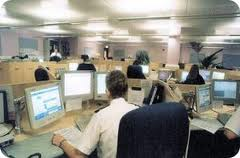 Go Back to Contents