Part 6) Recovering Evidence at the Crime Scene:
By now, the CSI will have searched the scene and identified and marked-up physical evidence that will need to be collected. If the evidence has not already been photographically recorded, photographs will be taken just before recovery and packaging takes place. In fact, this is usually what actually happens especially at volume crime scenes such as at burglaries.

The CSI will recover each different type of evidence using a method that prevents the items from becoming contaminated or damaged. Hairs and fibres, for example may be recovered either by using a pair of tweezers (if the fibres are easily visible), or by using soft-adhesive sticky tape in what is called a fibre-lift. Latent fingerprints will first be revealed by dusting them with one of a range of powders and brushes, photographed, and then "lifted" away from the surface again using a soft-adhesive sticky tape. And footwear marks may be recovered using an electrostatic technique (called ESLA) which is able to reveal even only traces of dust deposited by a shoe on a floor or door surface. Often, different types of packaging can be used for the protection of the same type of evidence - there isn't actually any really hard and fast rule. The important point is that the CSI must use the best (the most appropriate) method he or she thinks for recovering the evidence to maximise its value when it is later examined in a forensic laboratory. And when in doubt, they will ask a more senior and experienced CSI for advice.

We see below someone attempting to force entry to a shop till. If they have used a tool such as a screwdriver, it is likely that a toolmark will be made on the till. The CSI will be able to make a cast of the toolmark, and if the tool is recovered, the toolmark can be "matched" to the tool. Footwear marks will also be left at the scene, and these can be recovered by the CSI. If shoes from a suspect are recovered, these can be "matched" to the footwear mark.

If the  store used "Smart Water", the person who carried out the crime will unknowingly have been "tagged" with a fluorescent dye when they committed the crime. This evidence can be used to uniquely place that person at the crime scene well after they have left the scene. 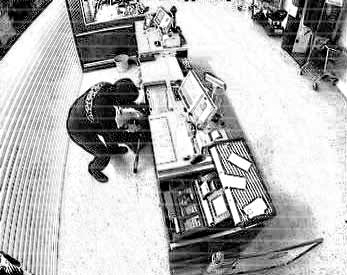 Go Back to Part 5

Part 7: PACKAGING AND LABELLING THE EVIDENCE ....